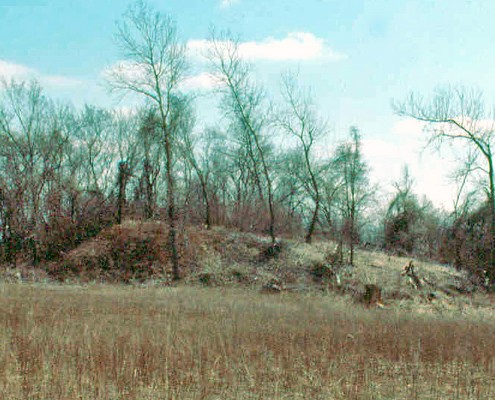 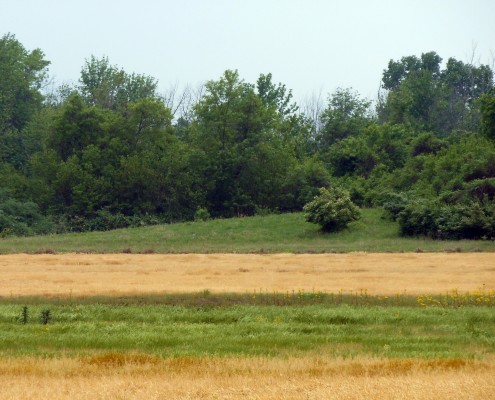 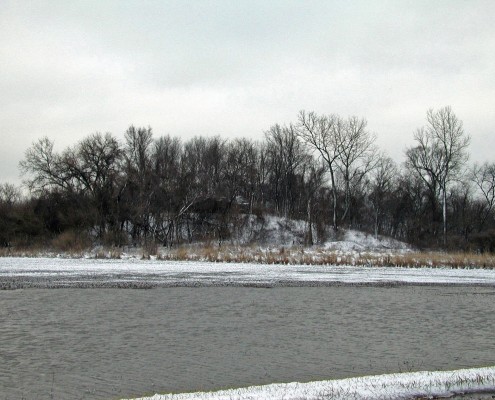 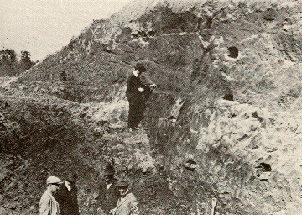 Although these two mounds are numbered separately on the Patrick Map, and are shown as two separate structures on the Moorehead and UWM maps, I consider them two levels of a single structure. Mound 10 is a lower platform to the east, and Mound 11 is a large, conical, higher eminence on the west half of this location. For convenience, however, I will discuss them separately and then discuss their overall configuration.

With 127 meters as the base line, it appears that the Mound 10 portion is 2.0 meters (6.5 feet) high. That figure varies greatly from previous heights for these mounds, but it appears that even in the earlier days there was confusion over their configuration. The McAdams Map of 1882 shows a square-shaped Mound 10 extending from the east side of Mound 11. No height is given. The Thomas Map of 1894 shows Mound 10 as a square platform mound larger than Mound 11 in area but 15 feet (4.6 meters) lower in height. The Peterson-McAdams of 1906 merges Mounds 10 and 11 into one large, oval mound.

In summary, I consider Mounds 10 and 11 to be a single unit, namely a large circular platform on the west (Mound 11) with a platform extending to the east (Mound 10). If that is the case, this structural unit is one of the few mounds with more than one terrace at the Cahokia site. This is contrasted with the other mounds in the Kunneman group (Mounds 6-11), which are combinations of oval or circular platforms and cone-shaped mounds with an intervening or connecting platform.

Preston Holder, from Washington University, conducted excavations and analysis in 1950s, which were well documented but not published. Timothy Pauketat reexamined the data and published the results in the book Temples for Cahokia’s Lords: Preston Holder’s 1955-1956 Excavations of Kunnemann Mound, Memoirs of the University of Michigan Museum of Anthropology, No. 26, 1993.