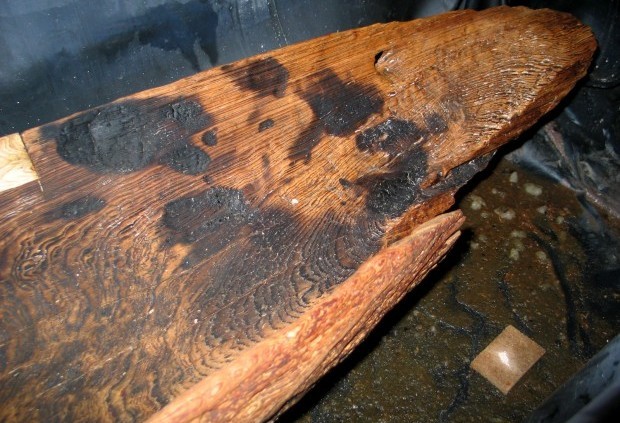 Seven hundred years is a long time for a canoe to travel.

Since it was made and used by Native Americans along the St. Francis River, the 22-1/2 foot long Bald Cypress canoe has been submerged in sandbars, re-discovered by fishermen and submerged again in a preservative solution at the Cahokia Mounds State Historic Site in Collinsville.

Now, after three years bathing in polyethylene glycol, Borax and other chemicals, the canoe is moving on to the next part of its journey.

For Gene Stratmann, the site technician who taught himself how to preserve the artifact, the canoe “is probably the highlight of our career.”

According to Bill Iseminger, assistant site manager at Cahokia, there are only about 100 Native American wooden canoes to be found nationally, and few, if any, as old as the one now resting at Cahokia Mounds.

“The preservation is very good,” Stratmann noted during a recent interview as he stood next to the canoe, pointing to tool marks and thin lines of wood grain.

The state historic site acquired the canoe for about $6,000 in 2009 after fishermen casting along recently flooded parts of the St. Francis River noticed “a different-looking log” buried in a sandbar. The men unearthed the canoe.

“Fortunately, they kept it moist,” Iseminger noted. Wood as old as that found in the canoe can rapidly dry out and decompose when taken out of the water.

After the men failed to find an Arkansas museum to buy the piece, Cahokia Mounds stepped in and brought it to Illinois, helped by representatives from the Illinois State Archaeological Society.

The canoe dates to the 1300s, the period when Cahokia itself was entering the last years of its Golden Age and when Mississippian culture stretched throughout the Midwest and near South.

Stratmann, who is certified in auto body repair and is the site’s “all-around handy man,” according to Iseminger, took the lead in preserving the piece. Stratmann has made replicas of Native American tools and canoes. Preserving one was something brand new to learn.

At first, that meant putting in phone calls. The site contacted other museums with ancient boats to ask about preservation methods. The task of preserving the canoe is a first-of-its-kind for the Collinsville site.

After learning the preservation method, Stratmann and site staff constructed a tank and frame to hold the canoe and the hundreds of gallons of preservative chemicals. The project took nine barrels of polyethylene glycol, at a cost of around $600 a barrel.

With the solution drained and the canoe raised out of the tank, it will dry for a year and staff will clean residue from the preservatives off the surface with tools as simple as a soft-bristle toothbrush.

The canoe would have been used for fishing, Iseminger theorized, and was both dug out using tools and burned out, he and Stratmann believe. The exact methods used to build such canoes are a matter of debate.

“Unfortunately, we don’t know all their technologies,” Stratmann explained. He can pick out gouges in the canoe and the burn marks on its prow. Although the canoe’s prow is sheared off, the rest of the canoe is solid.

“The preservation is really good. I always joke we should look so good in 700 years,” Stratmann said.

“We’ll probably have a few cracks,” he quipped.